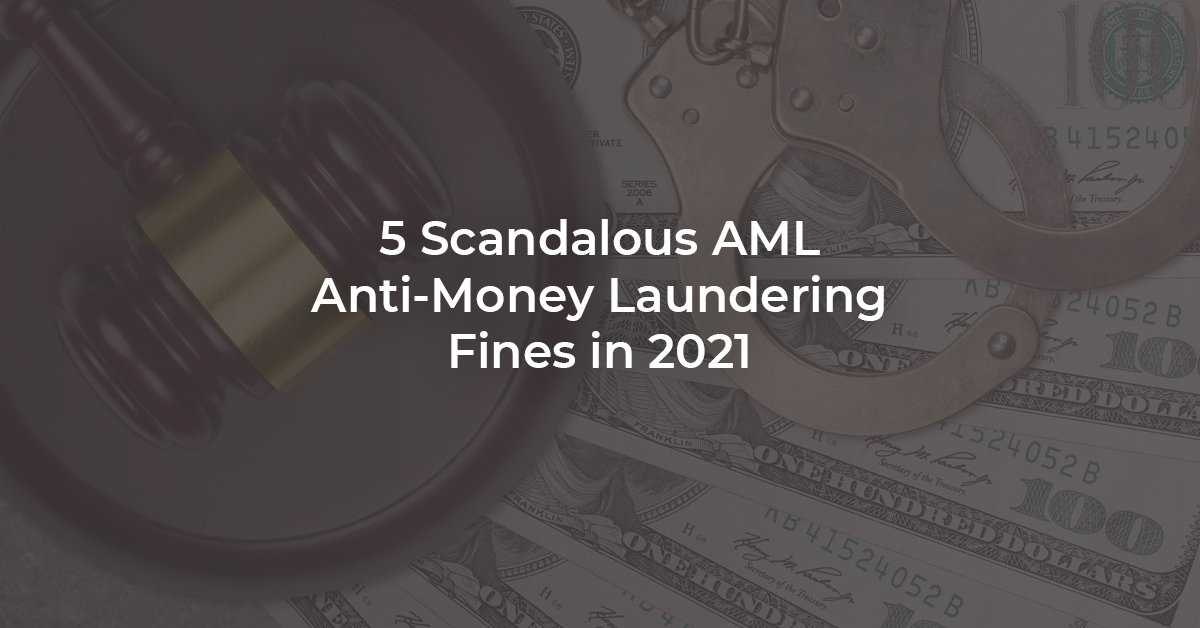 The United Nations estimated that the cost of global money laundering annually is between $800 billion – $2 trillion which makes up 2-5% of global GDP. Unfortunately, only 1% of the money laundered can be detected and acted upon by the authorities. In order to increase the rate of detection, regulatory bodies are pushing the financial institutions harder each year by updating the AML compliance requirements and tightening the reins of the controls. Based on a Global Enforcement Review of Kroll in 2021, financial crime fines reached  $3.75 billion in 2019 and $4.67 billion in 2020. In the first half of 2021, the total number of fines was $1.13 billion. Fines related to money laundering are the most common and costly ones among the other financial crimes since 2016. The banks and financial institutions are fined  for the AML compliance issues $444 million in 2019, $2.22 billion in 2020 and as of November 2021, the number was $1.97 billion which is expected to reach the amount of the previous year by the end of 2021.

The expectation is that the AML fines will gradually increase in the upcoming years because of three main reasons:

As the size of the AML-related fines are expected to reach maximum in 2021, here are the 5 most scandalous cases of AML fines issued in 2021 so far:

The state-backed NatWest, which was the Royal Bank of Scotland formerly, is the first British bank that committed an offense of failing to prevent money laundering and got fined by the Financial Conduct Authority (FCA) under the AML laws of the United Kingdom. The bank was found guilty of failing to detect and prevent a money laundering act of £365 million by their jewelry customer and fined £265 million. The jewelry firm called Fowler Oldfield was the client of NatWest in between 2013 and 2016. The estimated yearly revenue of the firm was £15 million; however, in five years, the firm deposited a total of £365 million which makes £1.8 million a day. Additionally, although the bank was not allowed to handle cash deposits according to their agreement, £264 million of the mentioned £365 million was in cash.

The NatWest bank stated regretfully that they failed in performing their AML duties and preventing the money laundering crime of their customer. This admission of the bank caused the fine to remain £265 million which was supposed to be higher.

The HSBC bank of the UK was fined $85 million (£64 million) by the British Financial Conduct Authority (FCA) due to several failures in three main parts of the bank’s transaction monitoring systems which are essential in applying AML processes for 8 years from March 2010 to 2018. According to the FCA, HSBC was charged with running insufficient monitoring of money laundering and terrorist financing activities as well as inadequate testing and controls over the correctness and integrity of the data collected in its monitoring systems. This kind of failure in regulatory compliance means that all the transactions within that time period which might be in a value of billions of pounds were monitored erroneously or not monitored at all.

Swedbank AB was fined $5.5 million by Nasdaq Stockholm for failures in anti money laundering procedures of the bank and also violating rules on sharing and classifying information between 2016 and 2019. Nasdaq’s disciplinary committee stated that although the bank’s senior management was well aware of the fact, they failed in classifying information about money laundering by the rules.

Deutsche Bank, which is a Germany-based company offering financial services globally, was fined $130 million for violating Foreign Corrupt Practices Act (FCPA) and a commodities fraud scheme. The US Securities and Exchange Commission (SEC) investigated the bank and detected the crimes of bribery and fraud via which millions of dollars were funneled by Deutsche Bank. It is also found out that senior executive management of the bank was involved in the scheme willingly and they lay a plot to distort payments for corrupting the consultants. The total fine of $130 million consists of criminal penalties, criminal disgorgement, compensations for the victims and $43 million fine to be paid to the U.S. Securities & Exchange Commission.

The government of Malaysia and Malaysian bank AmBank agreed on a payment of $700 million to settle the claims that AmBank was included in 1MDB (1Malaysia Development Berhad) which was a huge financial scandal that affected political life in Malaysia. The former prime minister of Malaysia, Najib Razak, was holding his bank accounts in AmBank and one of them received an amount of $681 million from the Saudi royal family. As a result, Razak was condemned with the crimes of money laundering and corruption for the money transfer of these millions of dollars which was directly linked to the corruption scheme of 1MDB in 2019. This massive fine of $700 million is expected to create a devastating material strike on AmBank’s earnings.