Skip to content
Upcoming Recession May Lead to More Financial Crime, and Here is Why… 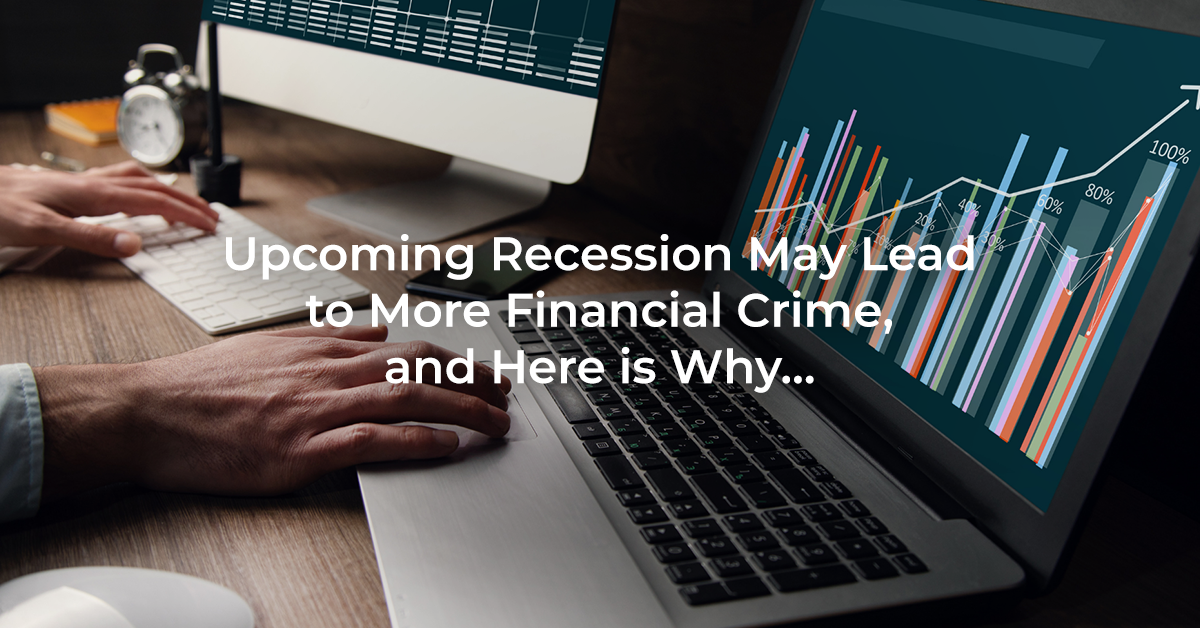 Upcoming Recession May Lead to More Financial Crime, and Here is Why…

Does a Recession Lead to More Fraud and Financial Crime?

One of the outcomes of the global pandemic is a global economic recession as the World Bank estimates that the rate of the global growth will drop to 2.9% in 2022 and stay like that for the upcoming 2 years. According to the AML compliance experts, the economic recession foreshadows a considerable escalation in the number of financial crimes. In such abrupt economical changes, people tend to take more risks which might result in getting involved with financial crime. Additionally, economically tough times open the door for the drug and human traffickers to misuse people who are in need of extra money. After the COVID-19, as the stay-at-home and becoming more digital trends are on the rise, the criminals started to focus more on the online crimes such as phishing schemes, email compromises, online fraud etc. It is essential to beware of the previous similar cases related to the financial crime and to surveil the behaviors in order to detect and prevent financial crime during the recession.

After Effects of 2009 Global Recession

In the aftermath of the Great Recession, it was the small-scale financial crimes that were rising in number. Among those, identity theft, credit card and insurance fraud, mortgage schemes, and employee-related frauds were thriving. Complaints about online fraud also increased tremendously as the number was 275,000 in 2008 and 350,000 in 2009.

In 2008, at the beginning of the recession, the technology used to detect and prevent financial crime was able to offer AML software solutions that are operating only the Rule-Based Systems. Although it seemed to provide all the possible solutions to the problems of that time, the number of increasing online crimes demonstrate that the Rule-Based Systems were not sufficient enough as they basically run on queries. That was an indicator signaling that a more analytical and behavioral system were needed to overcome the risks of the future.

The economic depression resulting from the recession combined with the new digital opportunities and the high cost of living accelerates and diversifies the financial crimes. There are a couple of prominent recession-driven fraud types that arise during the economic downturn.

When people feel desperate for money, they tend to take more risks. Data show that the loan fraud increased up to 75% during 2021 because taking risk refers to providing false information during the application of the loans in this case. The Federal Trade Commission (FTC) highlights that the student loans, auto loans and the personal loans are among the most popular loan frauds nowadays. Additionally, 5 to 20% of bad debt is considered to be derived from loan fraud.

Mortgage fraud reached its peak during the Great Recession in 2008 and 2009 by hitting 71% increase.  As the FBI reported, the mortgage fraudsters may actually be directly or indirectly associated with people from the industry, and the numbers indicate that mortgage fraud is on the rise again in 2022.

In the times of economical struggles, people act more desperately to acquire money quickly and approach unusual measures to achieve this goal. As a result, fraudulent systems such as pyramid or Ponzi schemes augmented up to 60%. According to the Office of National Statistics (ONS) of the UK, the financial investment related frauds expanded 42% as these are closely related to the pyramid schemes.

Since the last economic recession, the technological systems have evolved towards offering the best solutions for the sake of anti-money laundering (AML) compliance. The RegTech solutions encapsulating artificial intelligence (AI) and machine learning (ML) technologies are able to operate both the Rule-Based System and the Analytics-Based System. An important progress is achieved with the introduction of the Analytics-Based System in the AML compliance efforts as the concept of the behavioral analytics enables predictions based on the previous behavior of the user. The system basically utilizes the historical data in order to form a set of behaviors based on the previous actions of each user. Eventually, the system predicts the future actions of the users in the case of a specific risk.

Another method used to detect financial crimes with the help of technology is using targeted screening. Especially for human and drug trafficking crimes, the sources of targeted data are high in number and act as the resilient and effective mechanisms in the fight against the financial crime.

How to Mitigate the Upcoming Recession

To sum up, as the economic recession draws near, the inevitable outcome of a spike in the financial crimes ensues. The financial institutions that foresee what is coming, pick up the pace and operate effective solutions to detect the new types of the risks will likely keep their businesses safe from criminal activity. To their advantage, the technological developments extended to bring in more enhanced evaluation and analytics systems in comparison to the previous recession. Advanced AI and ML-based AML compliance solutions are able to detect fraud and criminal activities in real-time when applied effectively in different levels of digital payment systems.